The Brief Edition of A PEOPLE AND A NATION offers a succinct and spirited narrative that tells the stories of all people in the United States. The authors' attention to race and racial identity, and their inclusion of everyday people and popular culture brings history to life, engaging readers and encouraging them to imagine what life was really like in the past. In the tenth edition, the number of chapters has been reduced from 33 to 29, making the text easier to assign in a typical semester. Available in the following split options: A PEOPLE AND A NATION, Brief Tenth Edition (Chapters 1–29), ISBN: 843; Volume I: TO 1877 (Chapters 1–14), ISBN: 850; Volume II: SINCE 1865 (Chapters 14-29), ISBN: 867. Mary Beth Norton, the Mary Donlon Alger Professor of American History at Cornell University, received her B.A. From the University of Michigan and her Ph.D. 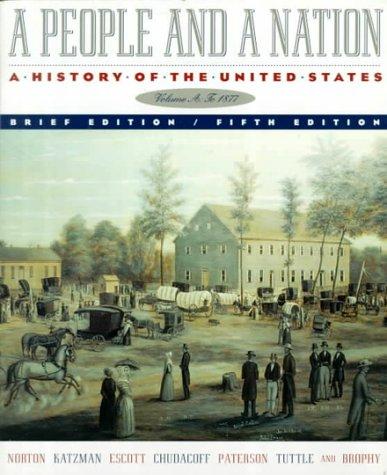 From Harvard University. She teaches courses in the history of exploration, early America, women’s history, Atlantic world, and American Revolution. Her many books have won prizes from the Society of American Historians, Berkshire Conference of Women Historians, and English-Speaking Union.

Her book, FOUNDING MOTHERS & FATHERS (1996), was a finalist for the Pulitzer Prize. In 2011 her book SEPARATED BY THEIR SEX: WOMEN IN PUBLIC AND PRIVATE IN THE COLONIAL ATLANTIC WORLD was published. She was Pitt Professor of American History at the University of Cambridge in 2005-2006. The Rockefeller Foundation, Guggenheim Foundation, and Huntington Library, among others, have awarded her fellowships. Adolescence Steinberg 11th Edition. Professor Norton has served on the National Council for the Humanities and is an elected member of the American Academy of Arts and Sciences. She has appeared on Book TV, the History and Discovery Channels, PBS, and NBC as a commentator on Early American history.

Jane Kamensky, Brandeis University. Jane Kamensky earned her B.A. From Yale University. She is Harry S. Truman Professor of American Civilization at Brandeis University, where she teaches courses in colonial American history, women's and family history, and the writing of history that have been recognized with a university-wide award for excellence in teaching. Her books, among others, include THE EXCHANGE ARTIST: A TALE OF HIGH-FLYING SPECULATION AND AMERICA'S FIRST BANKING COLLAPSE (2008), a finalist for the 2009 George Washington Book Prize; and THE COLONIAL MOSAIC: AMERICAN WOMEN, 1600-1760 (1995).

She is co-editor of THE OXFORD HANDBOOK OF THE AMERICAN REVOLUTION (2012) and the co-author of the historical novel BLINDSPOT (2008), a New York Times editor's choice and Boston Globe bestseller. Jane has served on the editorial boards of several journals as well as on the Council of the American Antiquarian Society and the Executive Board of the Organization of American Historians. She has appeared on such media outlets as PBS, CSPAN, the History Channel, and NPR, and has won numerous major grants and fellowships to support her scholarship. Her next book, COPLEY: A LIFE IN COLOR, will be published by W. Carol Sheriff, Brandeis University. Carol Sheriff received her B.A.

From Wesleyan University and her Ph.D. From Yale University. She has taught at the College of William and Mary since 1993, where she has won the Thomas Jefferson Teaching Award, the Alumni Teaching Fellowship Award, and the University Professorship for Teaching Excellence. Carol teaches the U.S. History survey as well as classes on the Early Republic, the Civil War Era, and the American West.