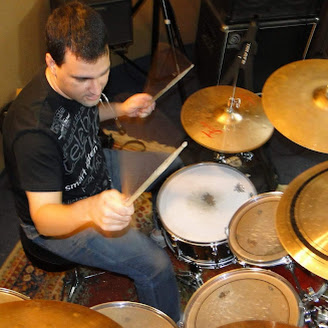 To make it easier I have highlited the drums and did the best explaining I could. Most of this is for right handed drummers but for the left handed drummers do this but visa v ersa   To set up a drum set, you have to first put the Bass Drum down in a comfortable spot for it will be the base of the drum set and the middle of your drum set ( It's the biggest drum). Then, you should put on both Tom Tom(s) (The smallest one unless you have two) they go in the to poles sticking out of the Bass Drum. The Tom Tom(s) should just slide right on because they have two large holes horizontally in each side. Next I would put down the Snare Drum (the one with beads strapped to the bottom of it).

The snare allways has two heads, the top which you strike, and the bottom which has a strip of metal coil thi ngs that is held in a bracket and can be tightened or loosened with a twisting knob and a lever. Most snares give off an unpleasant after-ring, which can be eliminated using tape and cloth. The bass drum has a foot pedal, and usually has two heads but not always.

Most drummers deffen the boomy sound they often have by putting pillows, blankets, foam, etc. Inside the drum. There are single, double, triple, or even quadruple bass drum kits. There are two types of toms; mounted, which branch off of a bass drum, and floor, which have adjustable legs. Secondary heads on toms are not allways nessecary, and are used on basis of personal preference/funds. Cymbal types are the hi-hat, two cymbals that can be pressed together using a foot pedal, ride, the largest cymbal used typically for the chorus of a song, crash, used to end drum fills or as part of the main drum beat, splash, similar to the crash but smaller with a. 'splashy' sound, and the gong, an Asian sounding cymbal, smaller gongs are often called 'China' cymbals.