TEACHER was first published in 1963 to excited acclaim. Its author, Sylvia Ashton-Warner, who lived in New Zealand and spent many years teaching Maori children, found that Maoris taught according to British methods were not learning to read. They were passionate, moody children, bred in an ancient legend-haunted tradition; how could she build them a bridge to European culture that would enable them to take hold of the great joy of reading? Ashton-Warner devised a method whereby written words became prized possessions for her students. 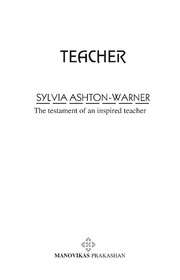 Today, her findings are strikingly relevant to the teaching of socially disadvantaged and non-English-speaking students. TEACHER is part diary, part inspired description of Ashton-Warner's teaching method in action. Her fiercely loved children come alive individually, as do the unique setting and the character of this extraordinary woman. Sizzla Praise Ye Jah Rar Files. Writer and educator, Sylvia Ashton-Warner was born in Stratford, New Zealand, on December 17, 1908. As a teacher of Maori children, she pioneered a pedagogy geared to their culture and interests. The methods were outlined in her autobiography, Teacher (1963).

Ashton-Warner also taught at an experimental school in the United States and detailed her experiences in Spearpoint: Teacher in America. Her novels including Spinster, Incense to Idols, and Bell Call often feature strong women. Ashton-Warner died in 1984.